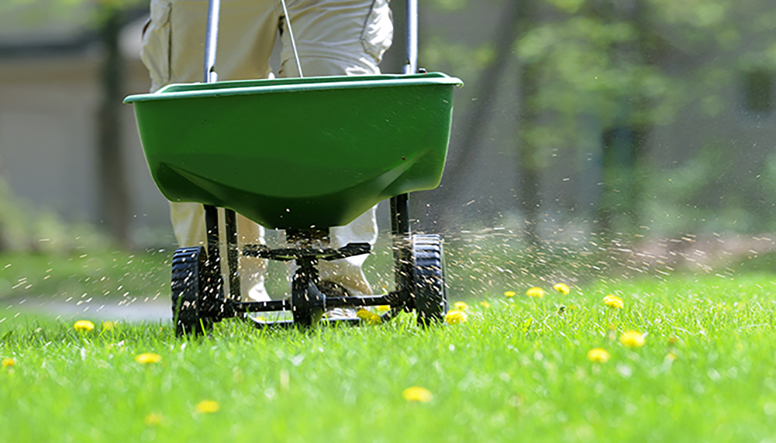 On my radio show I have never, ever, ever, ever recommend weed-and-feed fertilizers with Atrazine. And I’ve been steadfast on that for over 25 years. If you’ve read my weekly articles or listened to GardenLine over the years, there should be no question as to where I stand. But, if you are new to this area, you need to know the negative consequences of using atrazine-based weed-and-feed lawn products.

Let me start by asking this: Have you ever read the label on one of the bags? It amazes me how many people haven’t. The chemical atrazine can damage your trees and shrubs and, if used on your lawn year after year, eventually kill them. There’s also research suggesting cancerous threats to wildlife. But the threat to trees and shrubs is what I know and am most passionate about.

Atrazine-based weed-and-feeds are a bit like a drug to a lawn. Like a drug-addicted person who needs more and more to achieve a high, atrazine “addicted” lawns end up needing more and more of the chemical for a weed-free green. And that excessive use leads to sickly trees.

So, back to the question, “Have you ever read the back of a bag of weed-and-feed with atrazine?” Here’s a sample, which should scare you:

Frightening stuff, right? And how many lawns in Southeast Texas don’t have any trees or shrubs as part of the landscape? By the way, the death sentence is usually very quick with newly planted trees.

Maybe you know someone who has purposefully over-applied a weed-and-feed because they considered their weed problem worse than everyone else’s. Over-application results in excessive atrazine levels in the soil where it is taken up by trees, increasing the chances of damage. And applying weed-and-feed products in the spring, when trees are actively growing and putting on new leaves, is the worst! Damage inflicted in early spring can affect tree health for the entire growing season.

Extremely mature and otherwise healthy trees can usually tolerate one weed-and-feed application per year with minimal impact, but if you apply more than once a year – and do it year after year – your trees’ health will deteriorate, and they’ll eventually die.  Instead, you should follow my schedules for lawn care and weed control – Randy’s Schedules. Then, you won’t need to use such a caustic chemical ever again.

Hopefully, one day, the Environmental Protection Agency will appropriately ban this product. Just a year and a half ago, an EPA report made me think the time for restrictions was approaching. An article by Sustainable Pulse, entitled “New EPA Report Will Lead to Virtual US Ban on Atrazine Herbicide” said, “Atrazine is also well known as a hormone disruptor that has been linked to birth defects and cancer in humans, and contamination of ground-, surface- and drinking-water supplies. About 70 million pounds of atrazine are used in the United States each year.”

“The second-most widely used pesticide in the United States, and already banned in Europe, atrazine was found to cause reproductive harm to mammals and birds in real-world scenarios, with EPA “levels of concern” surpassed nearly 200-fold, according to the new EPA assessment. Atrazine is present in water levels much higher than are needed to kill frogs and other amphibians, whose populations are currently in steep decline across the United States. Numerous studies have shown that atrazine chemically castrates and feminizes male frogs at concentrations lower than the level allowed in drinking water by the EPA.”

“Anyone who cares about wildlife, people and the environment should be deeply troubled by this finding” said Nathan Donley, a scientist with the Center for Biological Diversity. “When the government’s own scientists say there’s enough atrazine in streams and rivers right now to kill frogs and other imperiled wildlife, we should be worried. How many animals have to die before we do what Europe did 12 years ago and ban atrazine?”

There’s even scarier research on the hideous side effects of atrazine on aquatic animals and human drinking water. Reports from the Pesticide Action Network North America, The National Institute of Environmental Health Sciences, and the University of California-Berkeley point out the concerns.
After reading those, I think you’ll wonder why this chemical is still allowed to be sold and used.

You may also be wondering why some of our advertisers keep selling such products. Frankly, it’s because they know not everyone is listening to a show like GardenLine. Weed-and-feeds are all some people know, especially if they just moved here from another state. The retailers simply don’t want to lose a sale or drive a customer away. I’m also pretty sure national weed-and-feed manufacturers offer nurseries, garden centers and hardware stores added financial incentives to carry the product. In other words, they’ve become highly profitable items.

I invite you to do your own research on this topic. Sure, I’ll bet you can find positive data from fertilizer manufacturers. Just remember that almost all their research has been conducted on turf plots or in fields with NO TREES!!! Watch their television ads with a critical eye, too.  They never, ever show a lawn with any trees.

If you have friends, neighbors or family members who are using weed-and-feeds with atrazine, please share this article with them.