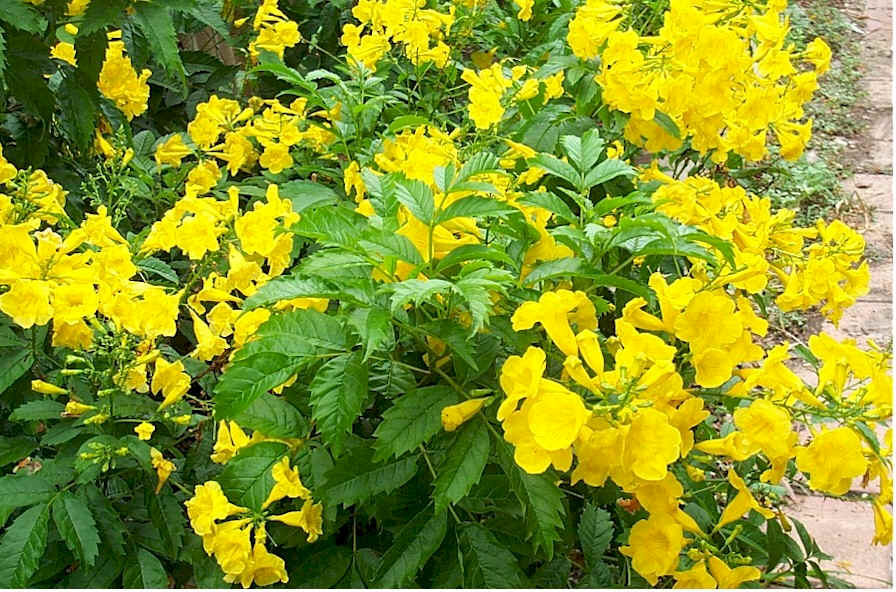 Esperanza is a Texas favorite.  It’s technically known as Texoma stans.  Another common name for it here in Texas, is Yellow Bells.  But let’s admit it – everyone loves saying the word, Esperanza!

I’ve always considered the Esperanza the ultimate “plant of extremes here in Texas”.  It’s drought tolerant and actually blooms its best when grown in drier conditions, so to speak.  That means that it doesn’t perform like you’d want it to if it gets too much moisture.  It’ll grow, but it won’t produce the yellow blooms we desire, when the root systems are consistently wet.

But Esperanza doesn’t look all that great during the winter if you experience any kind of freezing temperatures.  In fact, when there’s a leafless Esperanza, or one with lots of browning crunchy leaves, and because of the non-uniformity of the branches, when leafless or brown it might remind you of a ‘graveyard’ plant.

But when we know winter weather is over, the Esperanza always gets a major pruning in early spring.  And that pruning of anything and everything that looks a little freeze-damaged down to green wood, will encourage it to come roaring back.  Feed it every couple of months with any slow-release blooming plant food – rose food or even hibiscus food – and the plant will respond.

In my opinion, once an Esperanza starts blooming in May, if it’s fed consistently, you’re going to see non-stop gorgeous, deep golden yellow, bell-shaped blooms all the way until the first freeze or frost in November or December.  And that’s saying something, because there are scores of yellow-blooming plants for Texas landscapes.

Here’s an inside secret that not everyone knows about when caring for Esperanza; prune off any seed pods whenever you see them, and you’ll get even more blooms.  And, yes, you can try to propagate those seeds, but that’s a different tip sheet for a different day.   While a drought tolerant plant like this should be planted in full sun, or mostly sunny areas, it can do okay in filtered light areas.  Just know that you’ll have fewer blooms and it can look a bit leggy in such growing conditions.  It will not work in shade, period!